It is with tremendous sadness that we report the news that our Patron and friend, Bernard Middleton, has died. He was 94. Bernard was one of the most influential and respected bookbinders of our time.

During his extraordinarily long career Bernard touched the lives of bookbinders everywhere. He was an inspiration to generations of people who came into the craft, as a scholar and historian, as a pioneer of restoration, and as a leading light in the world of design binding.

Bernard followed his father into bookbinding, training at the Central School of Arts and Crafts and the British Museum. After military service, he finished his apprenticeship, attended evening classes at the London School of Printing, and soon afterwards began teaching at the Royal College of Art and LSP. For two years he was manager at the famous firm of Zaehnsdorf’s, then in 1953 he and his wife, Dora set up in business for themselves in Soho. From 1960 Bernard lived and worked in Clapham, south London.

Bernard’s work as a restorer was legendary: collectors and book sellers all over the world marvelled as his mastery. He also, more than any of his contemporaries, developed a passion for the history of the craft. His large library of books on bookbinding enabled him to write many articles on the subject, and in 1963, his great work, A History of English Craft Bookbinding Technique was published. Bernard’s book collection is now housed at the Carey Library at the Rochester Institute of Technology in New York. In 2000 RIT hosted a memorable conference to celebrate its opening.

Bernard’s other major book was The Restoration of Leather Bindings, which summed up all he had learnt or developed at the bench. This remains an invaluable guide to many who make their living restoring books.

Bernard was a founder member of the Guild of Contemporary Bookbinders (later Designer Bookbinders). He was a Fellow and President of DB, and honourary Fellow and Patron of SoB.

Above all he was a courteous, modest and gentle man, and a great friend to many. He will be sadly missed. 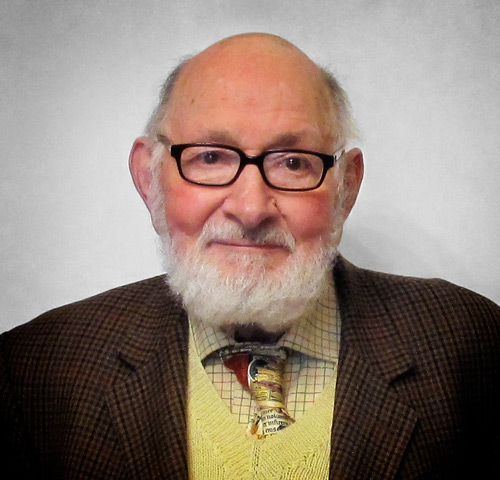 “Bernard was a good boy and never a problem” his mother told me when I was taken to visit her at a nearby nursing home back in the late 1980s. By then completely blind, she had been rigorous in ensuring Bernard wrote well, and she would correct and return any letters with mistakes, even into his adulthood. His father was a forwarder at the British Museum bindery having previously been at Sangorski’s.

Bernard totally devoted his life to book restoration together with producing designed bindings intricately tooled with gold leaf. When I first started working for him, he constantly reminded me of the need for disciplined hard work and he was at the bench six and a half days a week until his 80s.

Always generous with his time, sharing his knowledge with those seeking his advice and help. Each afternoon he would go up to his study to answer the day’s correspondence by return, hurrying to catch the last collection at 5.30pm. His trips to the post box were eased with his enthusiastic adoption of first the fax machine and then email.

His two monumental publications, The History of English Craft Bookbinding Technique and The Restoration of Leather Bindings became essential reading for students, practitioners, scholars, collectors and the book trade across the world. Following the installation of his bookbinding library at Rochester Institute of Technology, a conference ‘Bookbinding 2000’ was held there in his honour. More than 400 people from numerous countries attended.

He once said to me, he realised he no longer had the oomph to run and catch a bus. At first, I thought he was joking, but age had begun to take its toll. Following his first stroke, which happened during the Designer Bookbinders AGM in 2011, he gradually became slower and weaker. At 92, he finally retired after 78 years in the trade!

For the last two years of his life, he was virtually confined to bed. Finding difficultly shaving, he grew a snowy white beard which caused initial confusion to many. The highlights of his life became excursions to eat out and visits to book fairs (reluctantly in his wheelchair). Always smiling and looking radiant in his favourite bright yellow, sleeveless pullover. There, his eagle eyes sought out fine gold tooled bindings to add to his collection, and he met the myriad book dealers and collectors that he knew. His memory and mind remained razor sharp. Visitors enjoyed hearing his vivid memories of events and conversations with fellow bookbinders going back to the 1940s.

His admiration of the fine craftsmanship of yesteryear remained undiminished. The last book he collected arrived in the post on the morning of his death!

He was kind, gentle, extremely modest and loved by everybody.

In the trade he was known as ‘The Great Man’. His mother would have been so proud that her boy was not only good, but Great.